by Veneta Nikolova6 March, 201525 March, 2020
Is it possible to see the most interesting sites in Sofia for just 2 hours? It turns out it is possible. You just have to be at the courthouse downtown the city at 11 am or 18 pm. The guys from Free Sofia Tour will be there, waiting for you.
Two times a day, no matter if it is summer or winter, a group of tourists gathers there and starts the so-called Free Sofia Tour. It is a free walking tour in Sofia, organized r by a group of young volunteers, who dedicated their free time to the goal of making foreign tourists acquainted with the city of Sofia. 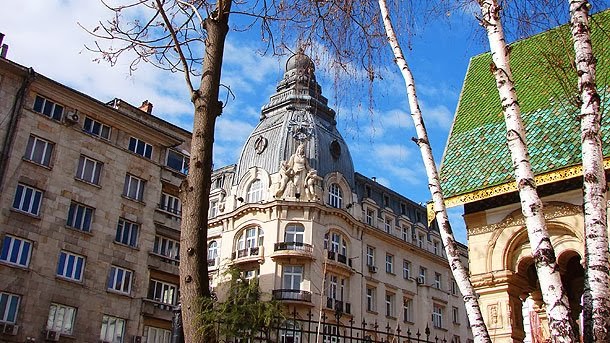 Many foreigners see this tour as a journey back in time

While walking on the crowded sidewalks they are fascinated by the remains of old Roman baths, well-preserved medieval churches, magnificent buildings from the beginning of the 20th century, which are reflected in the glass facades of new banks and hotels.
This mixture of different styles is part of the city’s atmosphere, guests say. More thousands of  tourists  from over 107 different countries have already been on the Free Sofia Tour.

The guides, most of them volunteers,  try to share interesting facts from the everyday life of the citizens of Sofia. Their goal is to  immerse tourists into the atmosphere of the city and make them want to visit it again.
“Sometimes there are just a few tourists at the starting point of the tour but there are times when 30 or 50 people come. There are tourists who say they do not usually like tours but enjoy this one very much. There are businessmen, backpackers, participants in conferences and others.”- one of the tour guides says.

The tour ends at the St. Alexander Nevsky cathedral, which is one of the

biggest on the Balkans

The guides take them there after they see the Roman ruins downtown Sofia, the former king’s castle, the Ivan Vazov National Theatre and others.

Visitors are  impressed by the so-called square of tolerance. This square is formed by the 4 different temples situated close to one another. These are an orthodox church, a mosque, a catholic church and a synagogue.

There are hot mineral springs in the heart of the city and tourists cannot believe Sofia has such treasures.

“ Sometimes they ask us why there are potholes on the streets and sidewalks but generally they like the city very much.”- my interlocutor  adds .
It seems foreign tourists enjoy the fact that different historical layers exist simultaneously in Sofia.  People  also like the Vitosha Mountain, the parks, and the mineral water springs. The citizens of Sofia are used to the vast green areas and parks but many tourists are impressed and say Sofia is one of the greenest cities they have ever visited.”
English: Alexander Markov
Radio Bulgaria
Veneta Nikolova . Neverending Journey
previous post