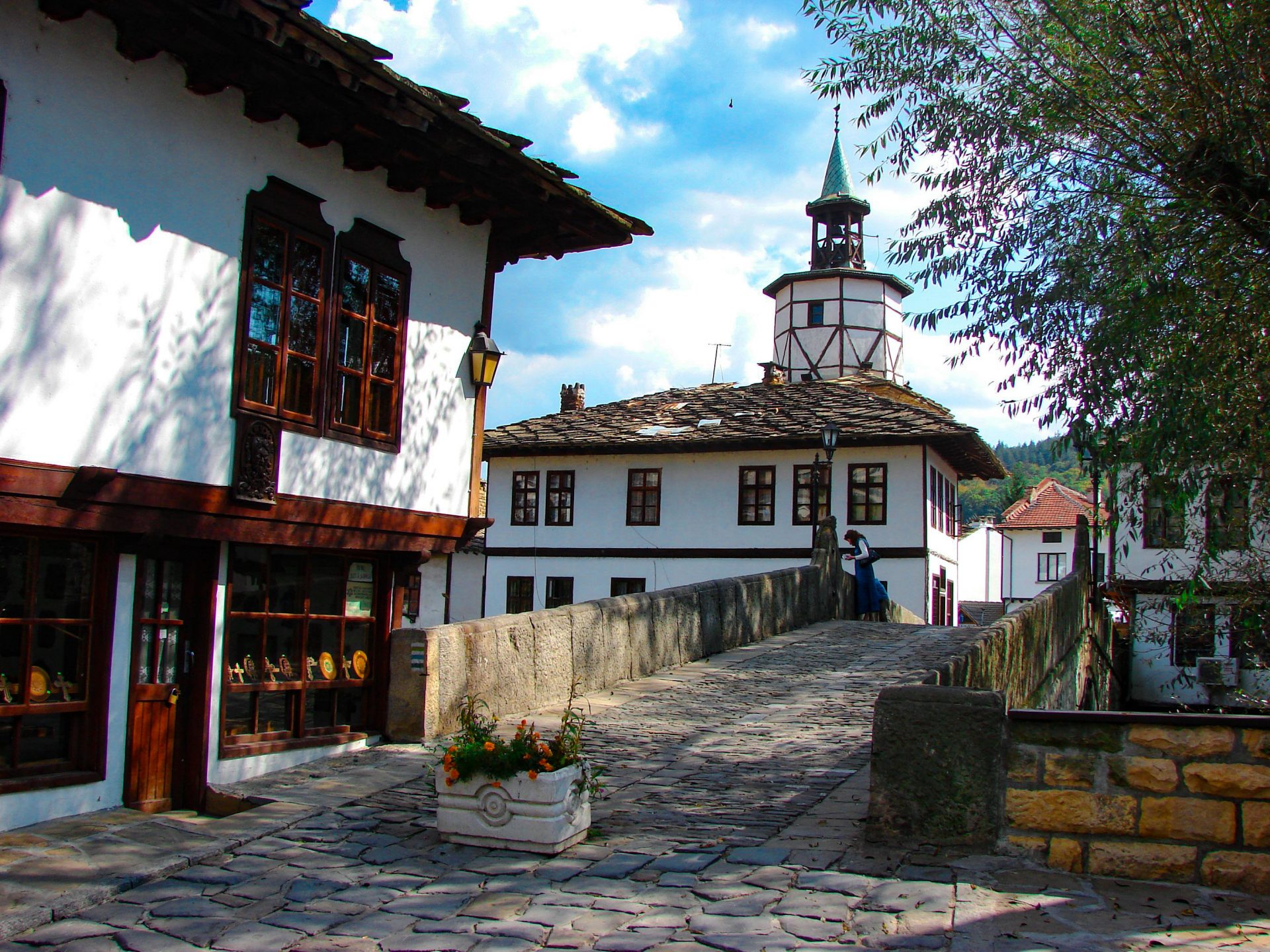 Tryavna is like  a colorful illustration. In the town located in the heart of the Stara Planina mountain, everything is small and neat. The sun is like a football rolling in a bright blue sky. The white houses are decorated with flowers and preserve the memory of talented sculptors, architects and brilliant artists who marked the city with their original work.

Immerse yourself in the past, enjoy your stroll through the old town of Tryavna

Our traditional tour begins with the Stone Bridge, also known as the Humpback Bridge. We stop there to make selfies  by of the old Clock Tower  from  1814 .

To this date, its  clock  continues to measure time with a crystal clear bell. Every evening, at 22 o’clock, tourists gather in the central square to listen to the pretty ballad of the carillon. 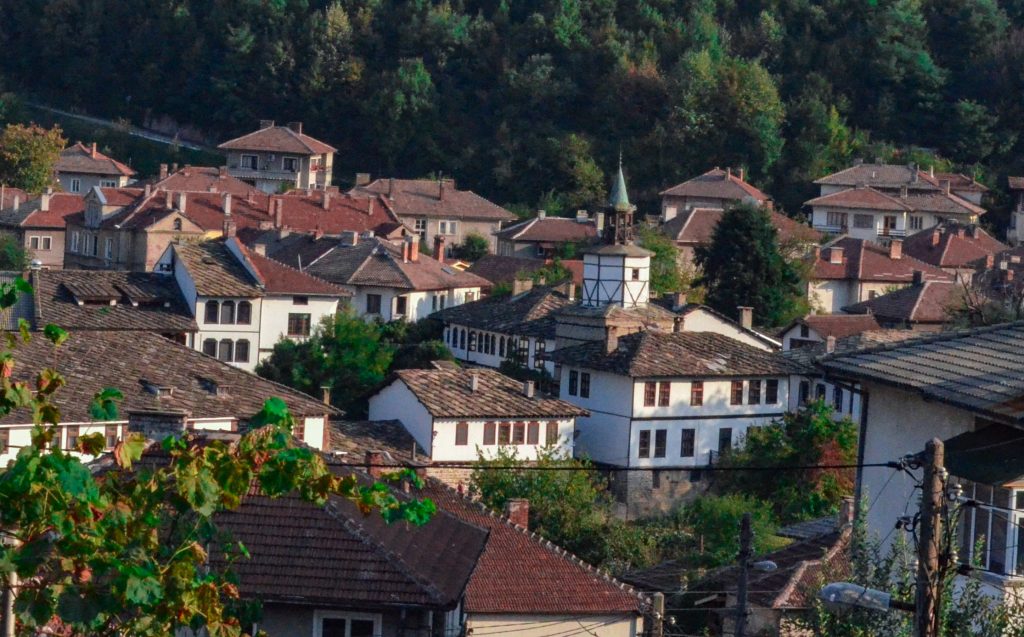 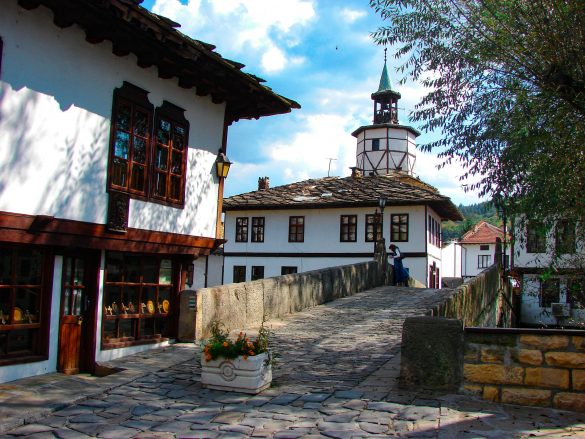 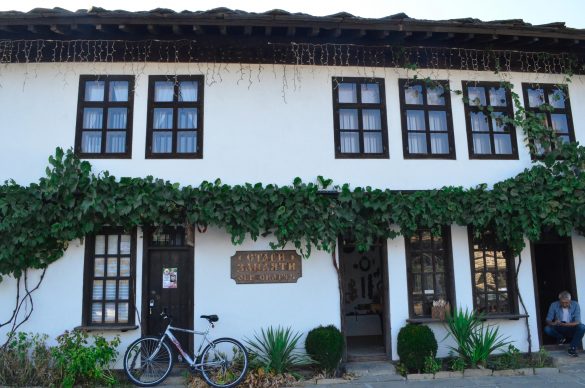 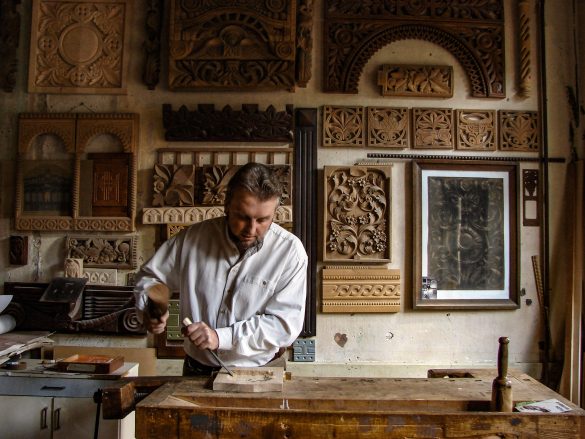 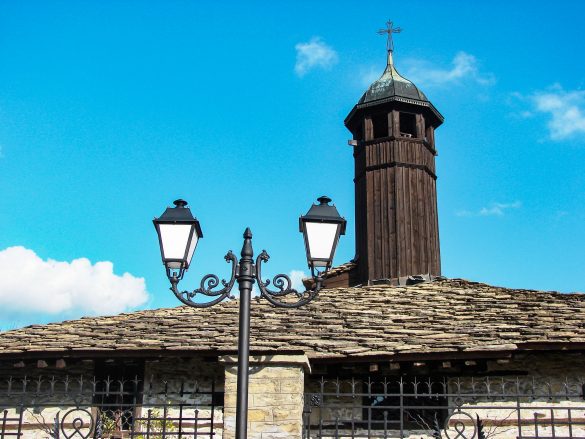 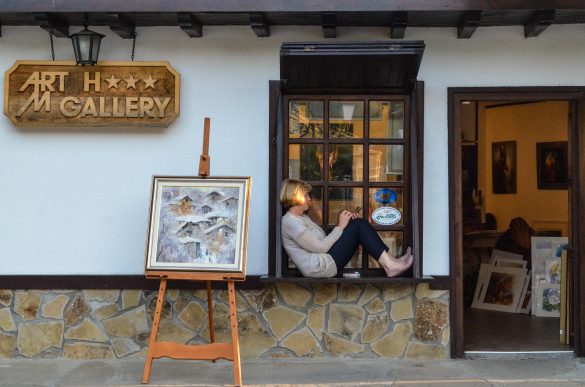 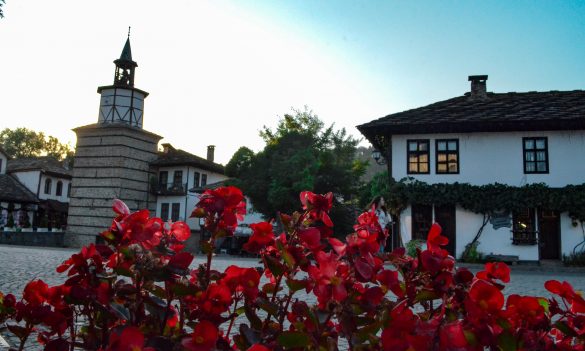 The city is impregnated with aroma of wood and, to this day. The hammer of the woodcarvers of Tryavna still resonates in the craft street. The woodcut school of Tryavna is well known. In the hands of local artisans, wood comes to life in the form of fabulous sunflowers, tulips, suns, grapes … These exquisite decorations are  still part the interior of many Tryavna houses.
Tourists are amazed ! Thousands of splendid  suns shine from ceilings of old wooden hinges and doors, souvenir shops and postcards. They are graved with grace and imagination by craftsmen of today and yesterday. The sun , in Bulgarian folklore, symbolizes the cycle of life. But not only! It is also a symbol of male energy, associated with abundance and success. Our ancestors believed that crafted sun  brings happiness. This is why one often finds  the solar symbol in local ornaments.

The Daskalov house presents the development of woodcraft in the area

The first art competition on our lands took place here. In 1808, the masters Dimitar Oshanetsa and his pupil Ivan Bochukovets concluded a bet on the construction of wood – graved ceilings. For six months, each of them worked diligently in one of the rooms of Daskalov’s house without knowing what his rival was doing. They locked the rooms so that no one could see the works. The artists worked with walnut wood, pine and alder. 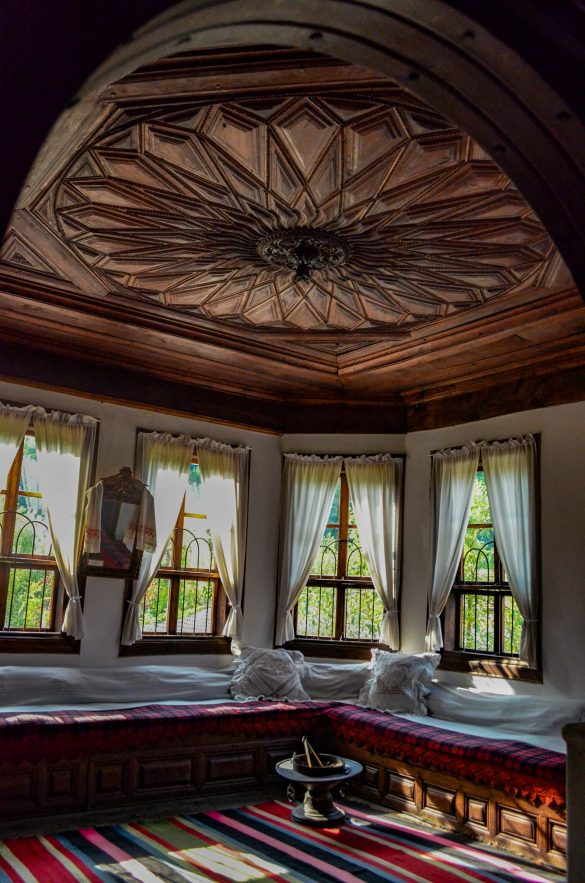 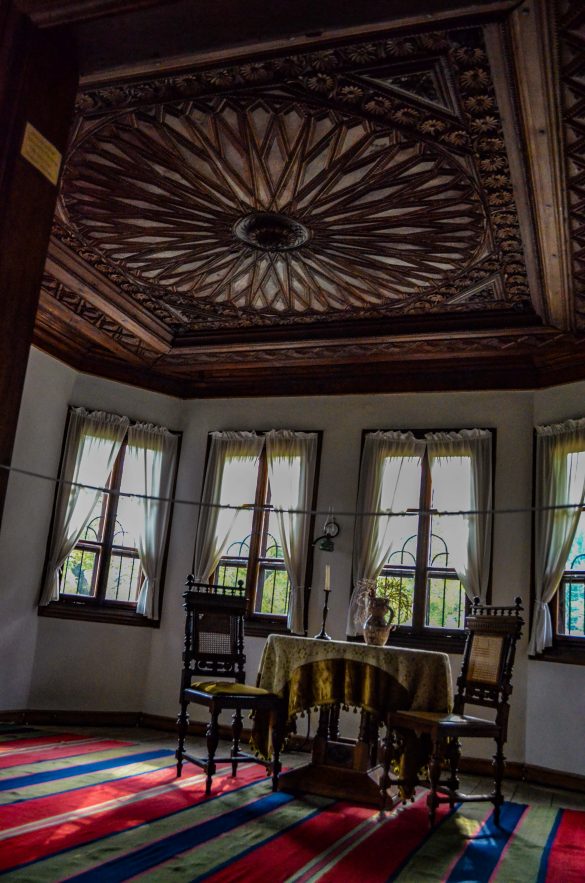 And when they finally presented their works, everyone was amazed! From the ceiling of the two rooms,, appeared  ravishing  craved suns. The sun Master Dimitar Oshanets’s sun  was named «Sun of the month of May» and the work of his pupil Ivan Bochukovets – «Sun of the month of July». 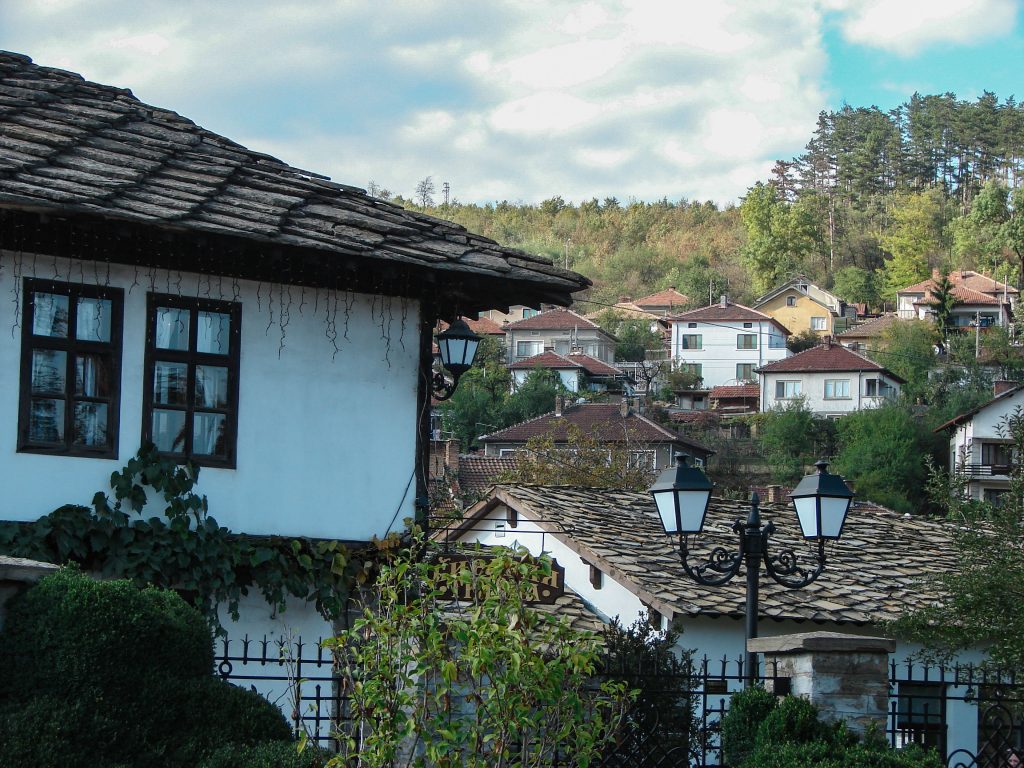 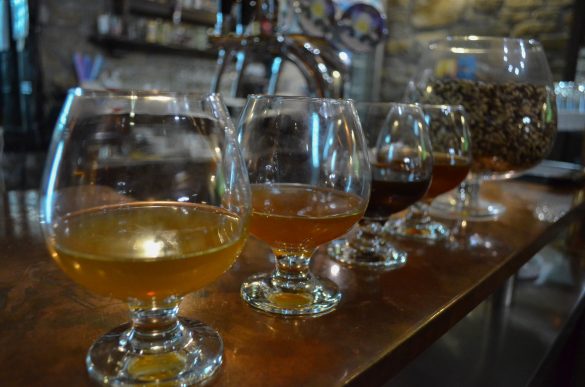 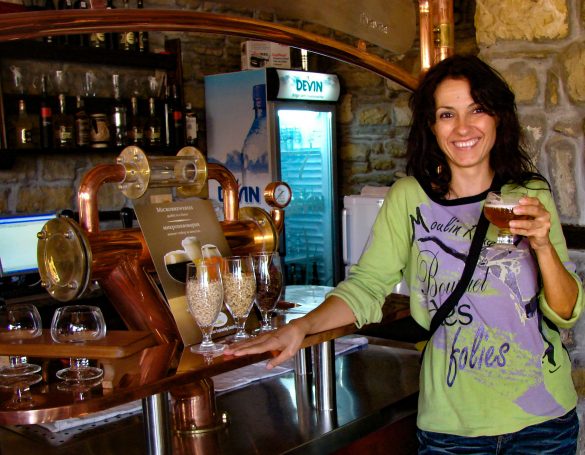 Every time I visit Tryavna, I stop in a pub near the Artisans street near the Humpback Bridge. This is the only place in the region where craft beer is produced from natural products. The technologies and recipes are traditional Belgian but the taste is typical Bulgarian. How about a beer with the smell of Chubritsa savory or of peach? You can view the entire production process  through a special panoramic window. The guests propose 4 types of craft beer: light, amber, fruity and dark. This beer is really divine! As well as the view that opens on the bridge humped with the clock tower, considered as symbols of Tryavna.

Discover the enchantment of the Bulgarka Nature Park

Tryavna is surrounded by the beautiful curves of the Balkans. A wonderful opportunity to spend at least a day diving in this green, wavy sea, sunken in a fresh aroma of greenery . At the beginning of September we went to the central station of Tryavna. 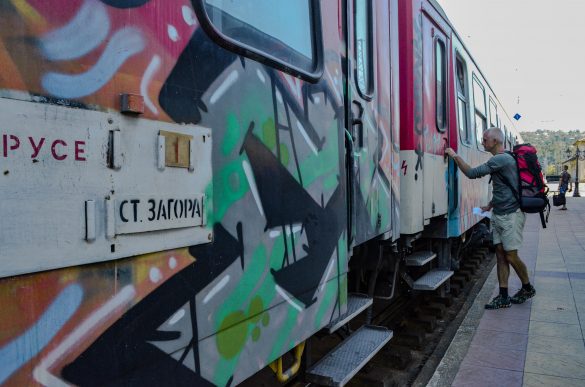 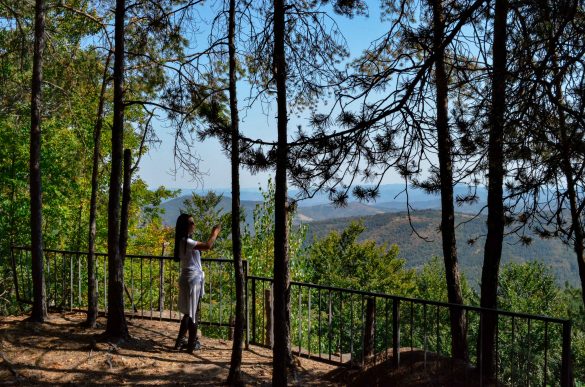 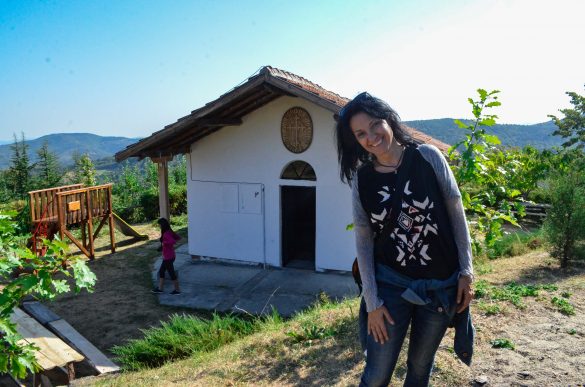 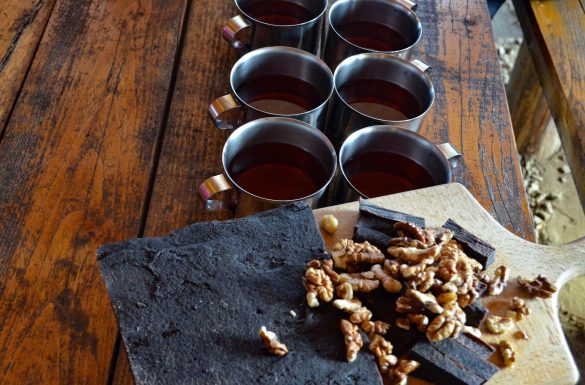 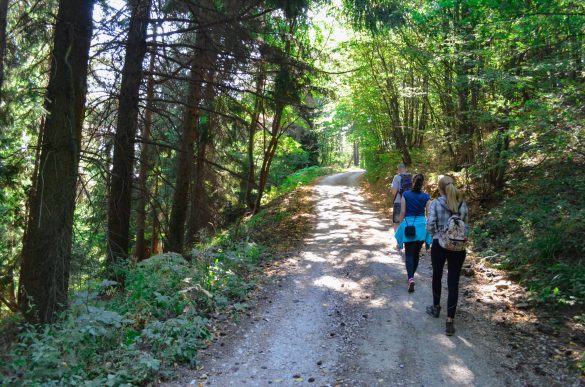 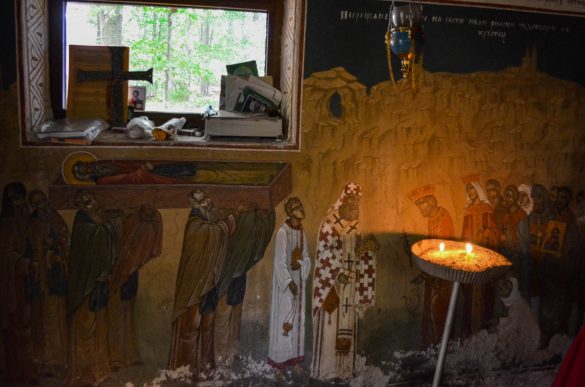 From there, we boarded the train and, after half an hour, we got off at the Buzovets stop, located in the heart of the forest.  We took  the path towards the summit of the Krastets/ 1007 m /. Forests of beech and coniferous trees, clean air, picturesque views, small chapels lost in the green and even an old well… The eye is insatiable with beauty and the soul – for adventures!

The surroundings of Tryavna are perfect for cycling. After two hours on foot we decided to go back on a bike. This is how we rode about 20 km through the small town of Plachkovtsi before arriving breathless in Tryavna.

How to get to Tryavna

There are three ways to get to Tryavna

Trains depart from Sofia Central Station. It is located about 2.55 km from the city centre, which is about 9 minutes by car. The train is the cheapest means of transport in Bulgaria. The journey time is about 6 hours.

There is a regular bus service between Sofia and Tryavna. Buses depart from Sofia Central Bus Station, 200 m from the Railway Station. Many private companies have their own counters in the main central hall. You have to go directly to them to buy tickets. The journey time is about 4 hours .

You can rent a car for your stay in Bulgaria. The driving time from Sofia to Triavna is about 3 hours

You can book your reservation directly from the link below