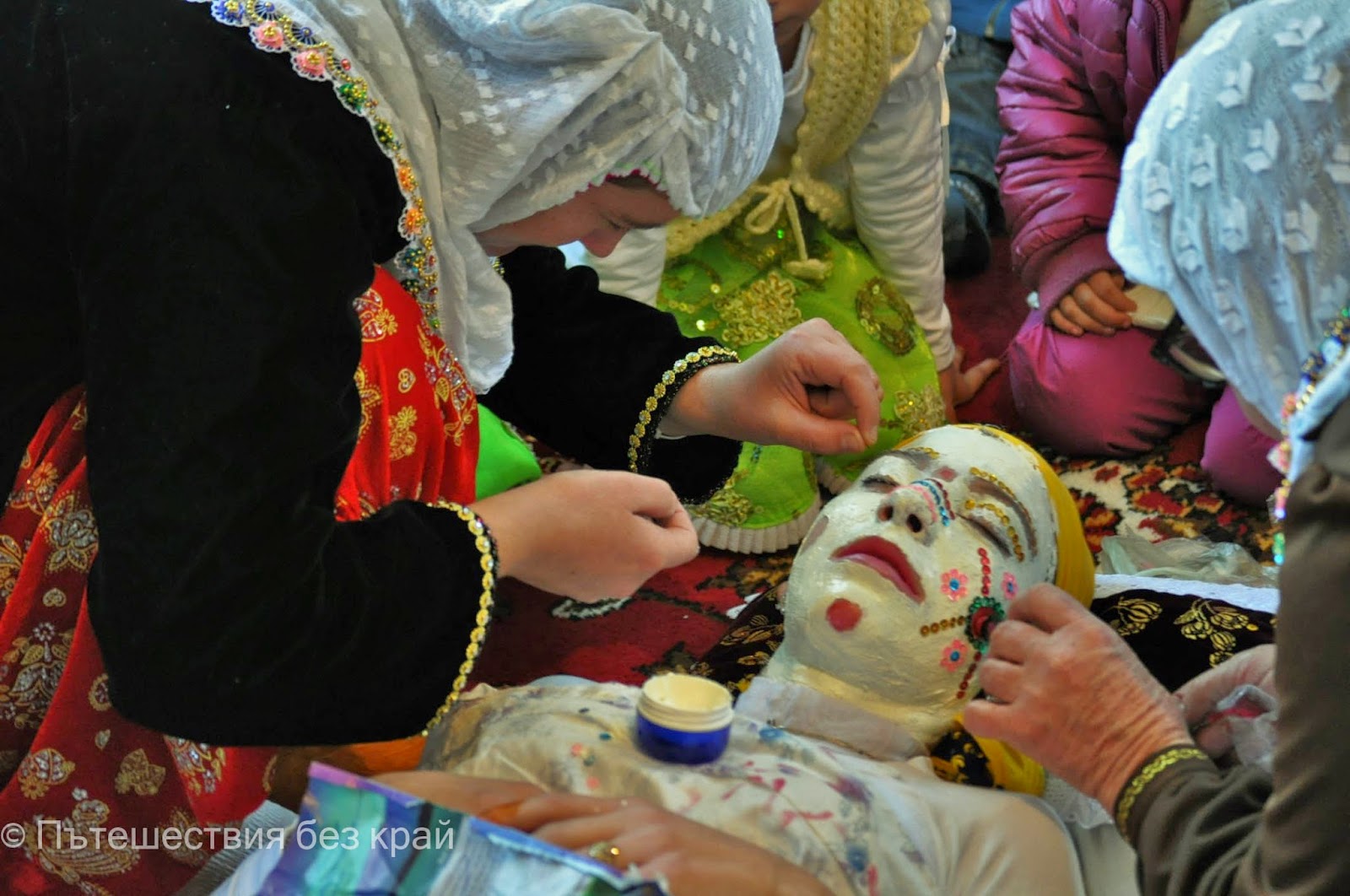 Ribnovo and its ancient wedding tradition

In one of the mountainous areas of southwestern Bulgaria is the Muslim-Bulgarian village of Ribnovo. It seems like time has stopped here and locals stubbornly stick to their patriarchal values, customs and traditions. Here when young couples decide to marry, their wedding turns into a fairytale experience – for three days the guests are celebrating and rejoicing. 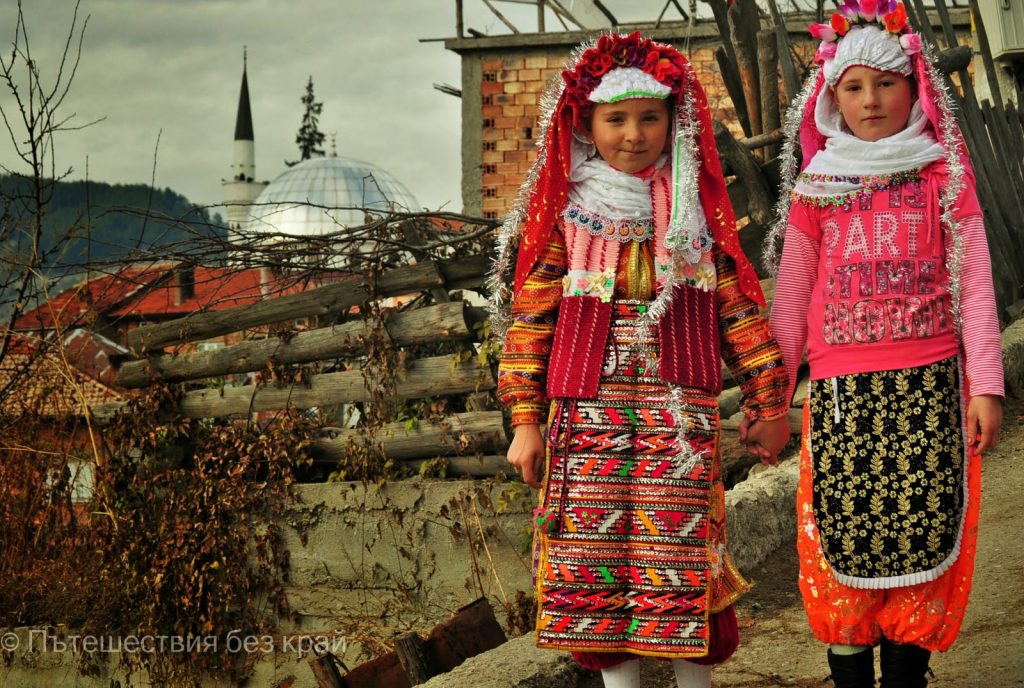 The village of Ribnovo is  located  some 120 km. from Sofia, high in the mountains. It is  quite isolated,  bustling with life. The steep streets are constantly full of women with colorful headscarves, children, and men. The whole place resounds with the sound of hammers and chisels because there is constant construction work going on. Music is heard from the distance. Such activity is not typical for the increasingly rising number of deserted villages in Bulgaria. 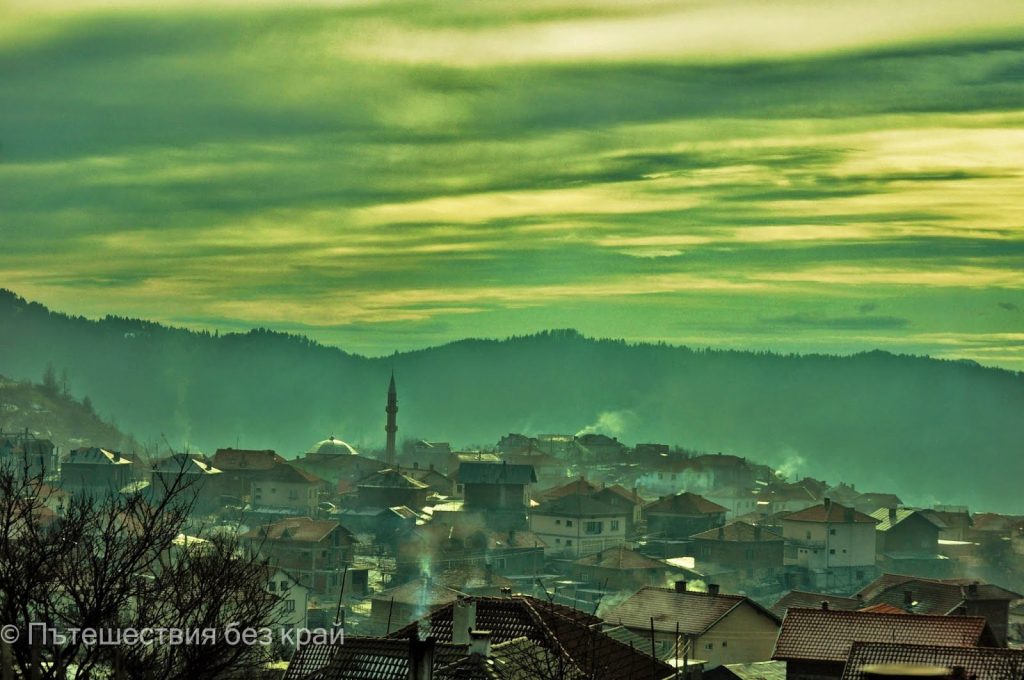 Ribnovo residents are encapsulated in time.

Their life is somewhat incomprehensible for us. The wedding ceremony in Ribnovo is the best expression of the outlook and lifestyle of these people, their sense of belonging to a small community that is sooner or later doomed to “dissolve” in today’s modern reality. The fate of Ribnovo residents is somehow predestined from birth and the stages in their lives are accompanied by certain rules and rituals. So it was 200-300 years ago, so it is today! 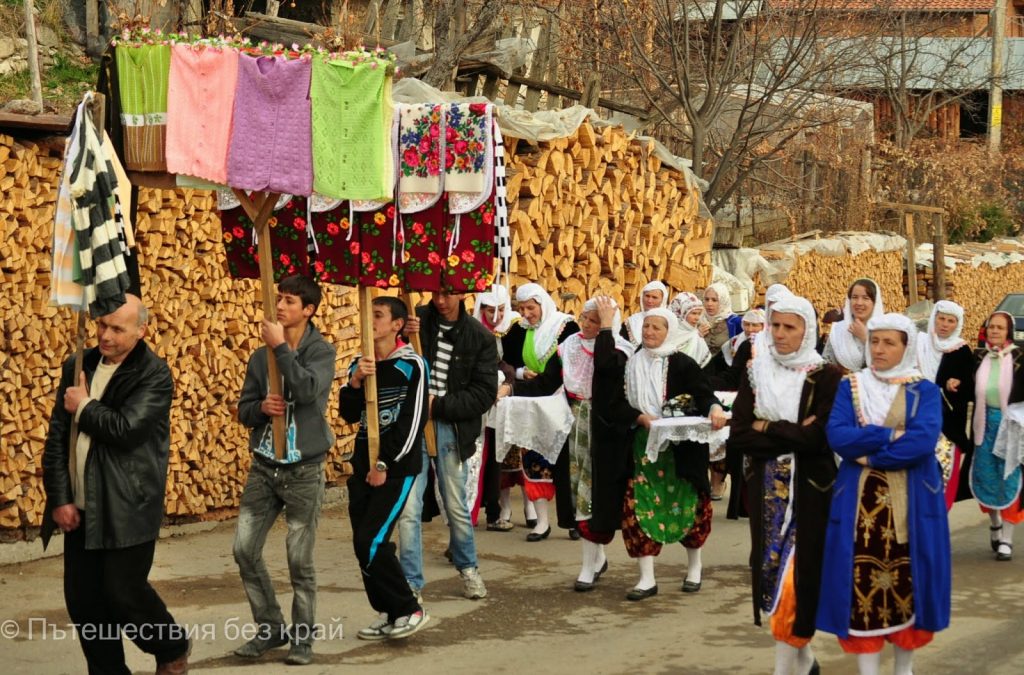 It is this predictability that gives locals a sense of security and “comfort”, which is lacking in us, “modern” people. Although many of them are forced to seek work abroad, they always return home. And when a girl is born in the family, they start collecting the dowry – all household belonging needed for family life. But if a boy is born – all efforts are aimed at building a new house for the future family.

Most amazing are the scenes with the preparation of the wedding trousseau. Everything that the parents have gathered over the years for the girl’s new family is taken outside the house of the bride. On high scaffolds along the entire street they arrange rugs, aprons, tablecloths, carpets … The result is an amazing explosion of colors. 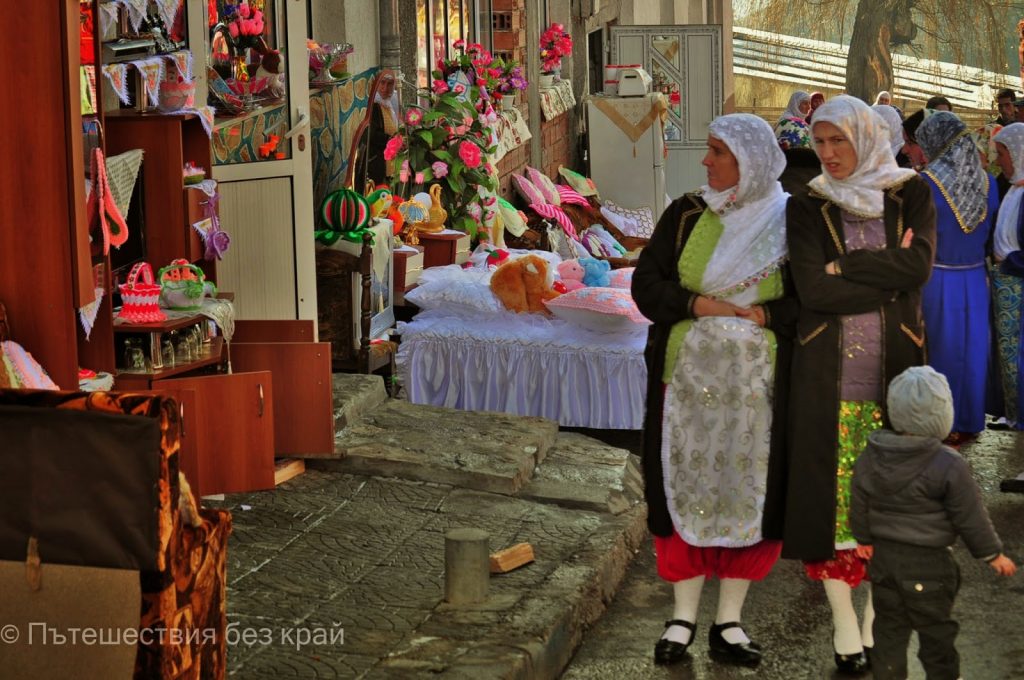 The parents also offer on display to the entire village the future household furniture prepared for the new family – the nuptial bed, the kitchen cupboards, the microwave oven, the plasma TV … And then a multitude of people starts gathering in front of the maiden’s house. From time to time the onlookers stop to gaze at a colorful rug or a new item of furniture, exchanging lively comments. And then comes the wedding procession before the bride is taken to her home where she will become a “gelina”. This is how brides in this region are called. 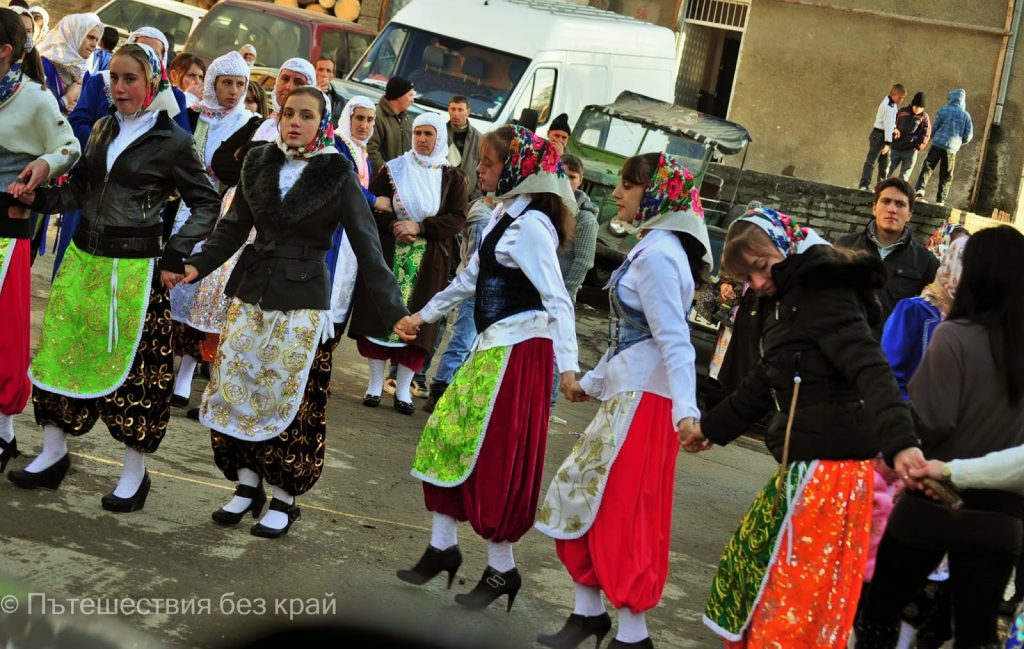 The mysterious ritual, preparing the young “gelina” for her new life

The mother takes the girl to her native home whose threshold she will cross for the last time as an unmarried girl. Only women gather round her. They help her put on her wedding dress which, interestingly, is not white but full of amazing colors. They put her to lie down and then a special woman from the village arrives to paint her face. For this purpose, she spreads white cream on her face and sticks colorful sequins on her cheeks, forehead and chin. 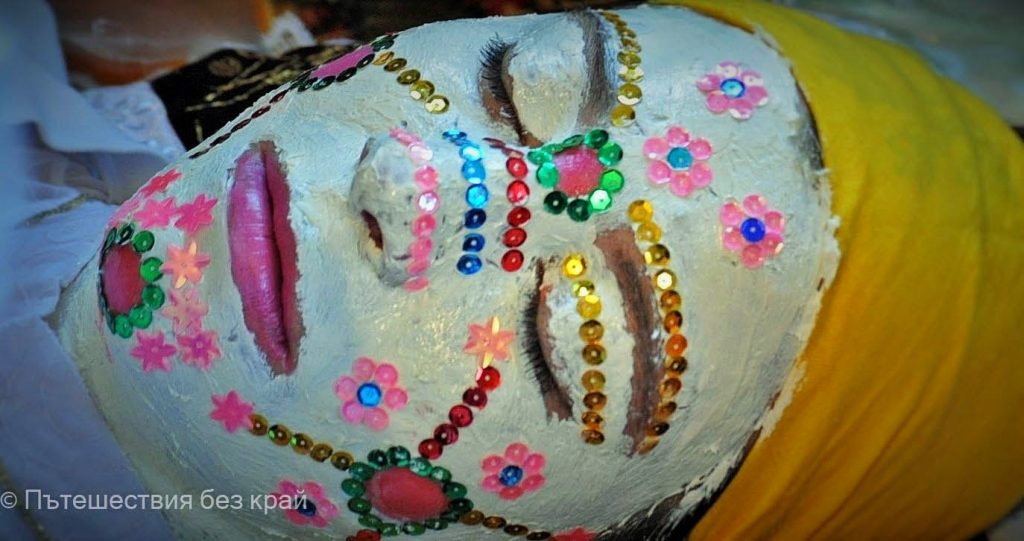 Thus, the bride becomes unrecognizable. Actually, this mask hides her from the world. One explanation is that this is a way to protect her from evil eyes. In this transitional moment between maidenhood and mature age the young woman is particularly fragile and vulnerable. 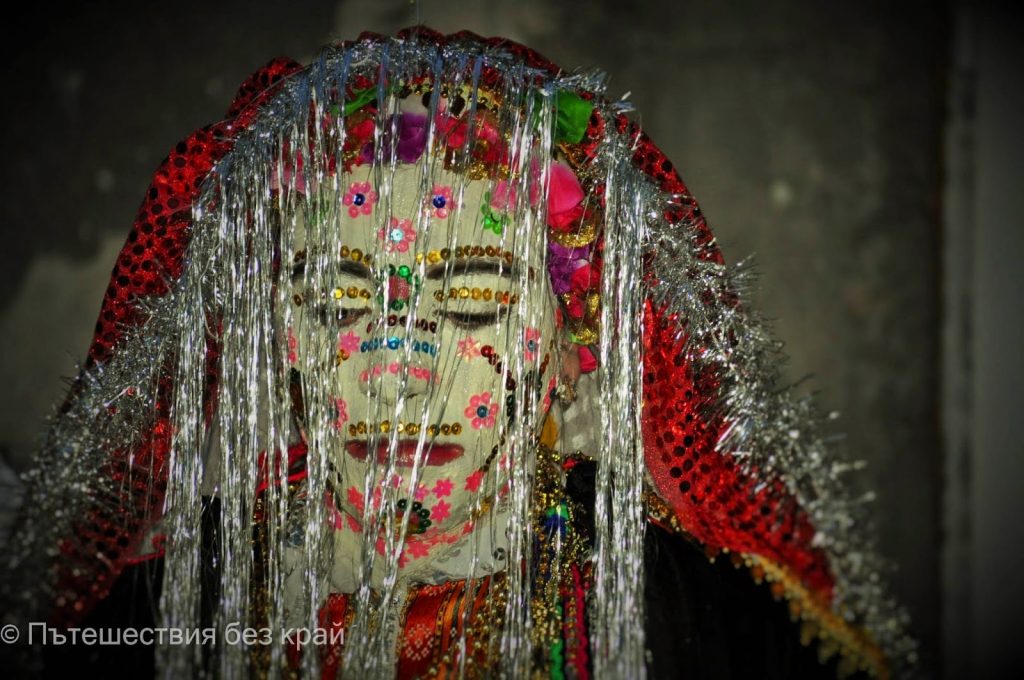 The inhabitants of Ribnovo live in a closed Muslim community which is stubbornly unwilling to change. These people are proud to publicly declare their “otherness” and their old customs. But that does not mean that they are archaic and are some sort of “relics” completely isolated from life in the 21st century! Unlike us, they have the ability to easily switch from tradition to modernity. The residents of Ribnovo exist simulatenously in two cultures and this makes them richer than people living in a globalized, uniform and standardized world.