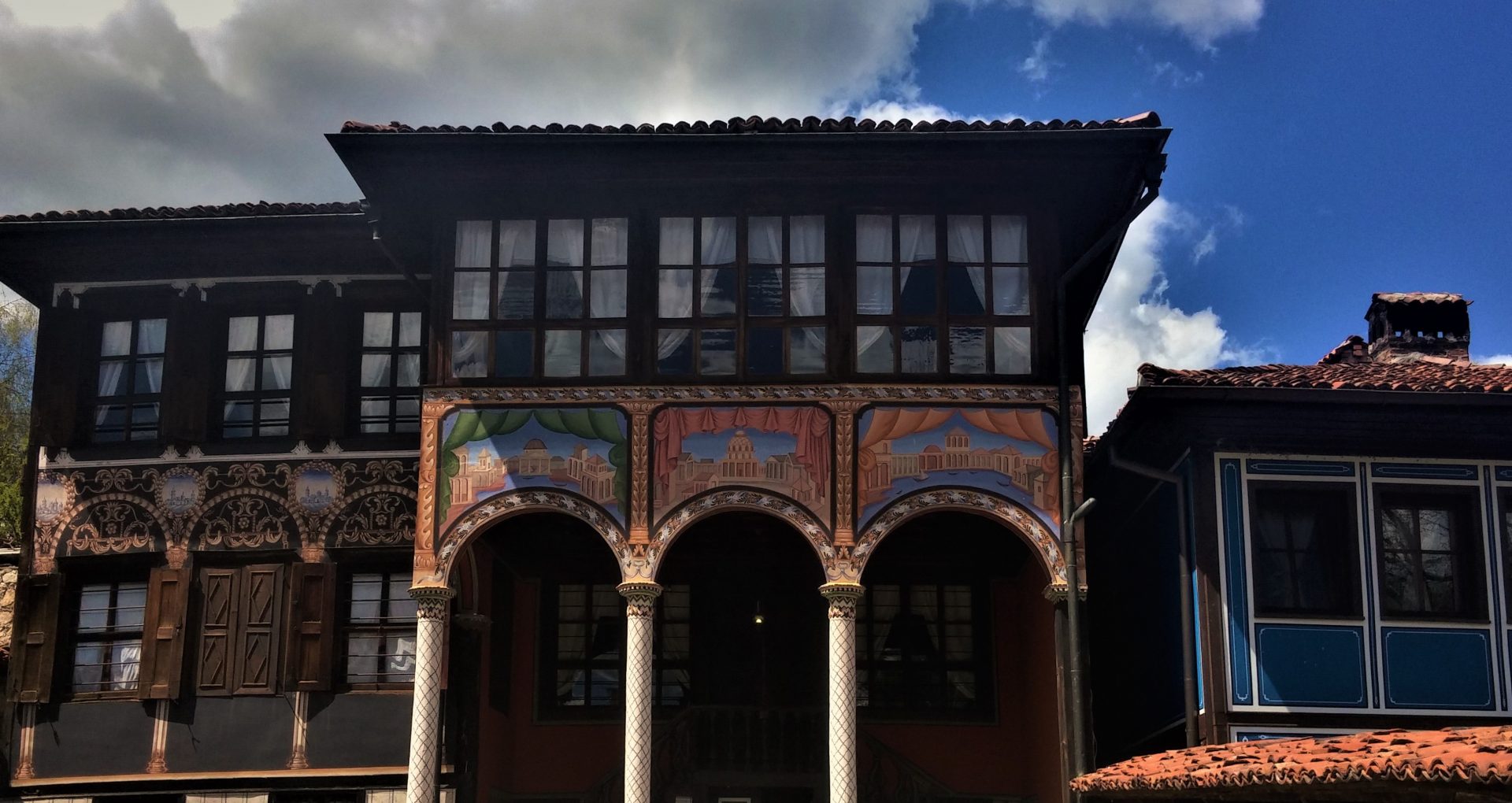 I have visited Koprivshtitsa so many times. That’s why I was convinced that this picturesque mountain town, which has long become a popular tourist destination, has nothing new to offer. I was certain that it had become overcrowded with tourists, too commercial at the expense of its authenticity.  But  I changed my mind! Because recently I went there and I fell in love with it.

Koprivshtitsa welcomed me bathed in sunlight with the bright colors of its houses. Most of them date from the Bulgarian Rеvival ( 19 century). They are well maintained and have been recently renovated. Light yellow, turquoise blue, ocher, brown, even pink – the city shone like a colorful carpet at the foot of the hills of the Sredna Gora mountain range. 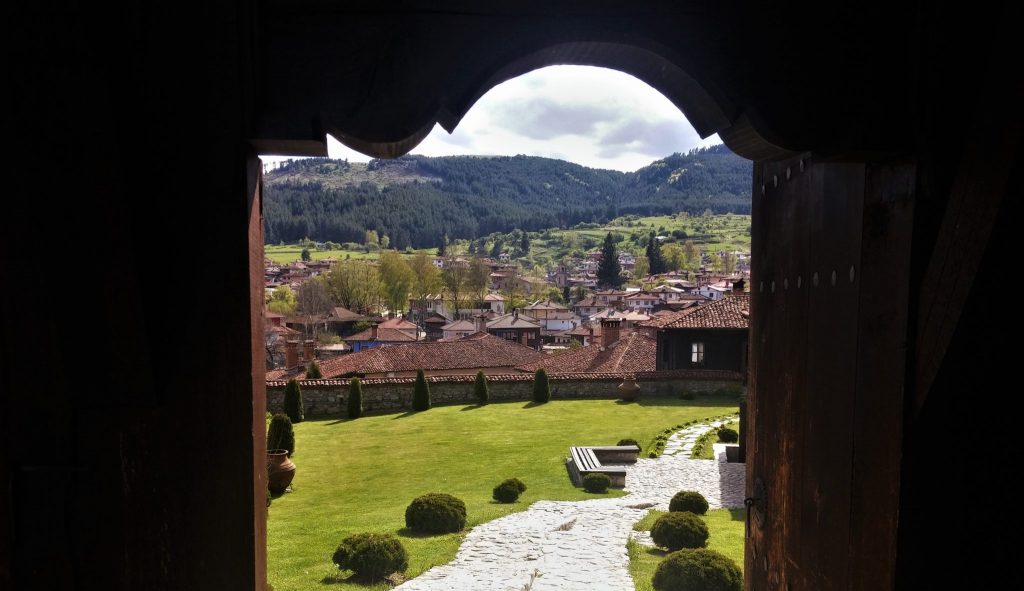 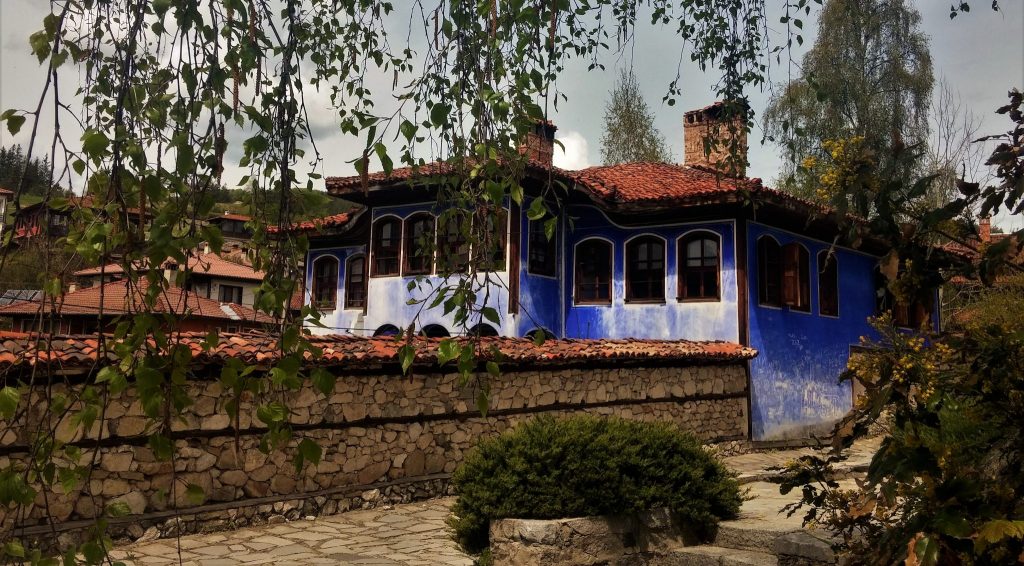 Not only the facades are blue, but also  the interior decorations of the houses, as well as most of the  local  handmade fabrics. The architecture of Koprivshtitsa is linked to the Revival period.  Most of its houses date from the 19 century.

Unlike other small towns in the area, I won’t see ruined buildings or other traces of neglect, typical of  some Bulgarian provincial towns. The Topolnitsa river, which flows through the city center, forms a lovely park where children play and run all day long. The alleys are clean and quiet. And what pleased me most – no traces of tourist hordes !! In addition Koprivshtitsa abounds with museums which have also been recently restored, with doors widely open to visitors.

1. Koprivshtitsa is а town with an european spirit

The traces of the Orient, with its chaos and its “laissez-aller”, are almost nonexistent there. Unlike other regions of our country. Although Bulgaria suffered a long and painful period of Ottoman occupation, during which social and religious freedoms were violated, Koprivshtitsa has two magnificent Orthodox churches. However, in this small mountain town, there have never been mosques. The Turkish invaders were forced to pray in a room in an administrative building. Why ? Because the local Bulgarian population was rich, educated and … wayward  !! 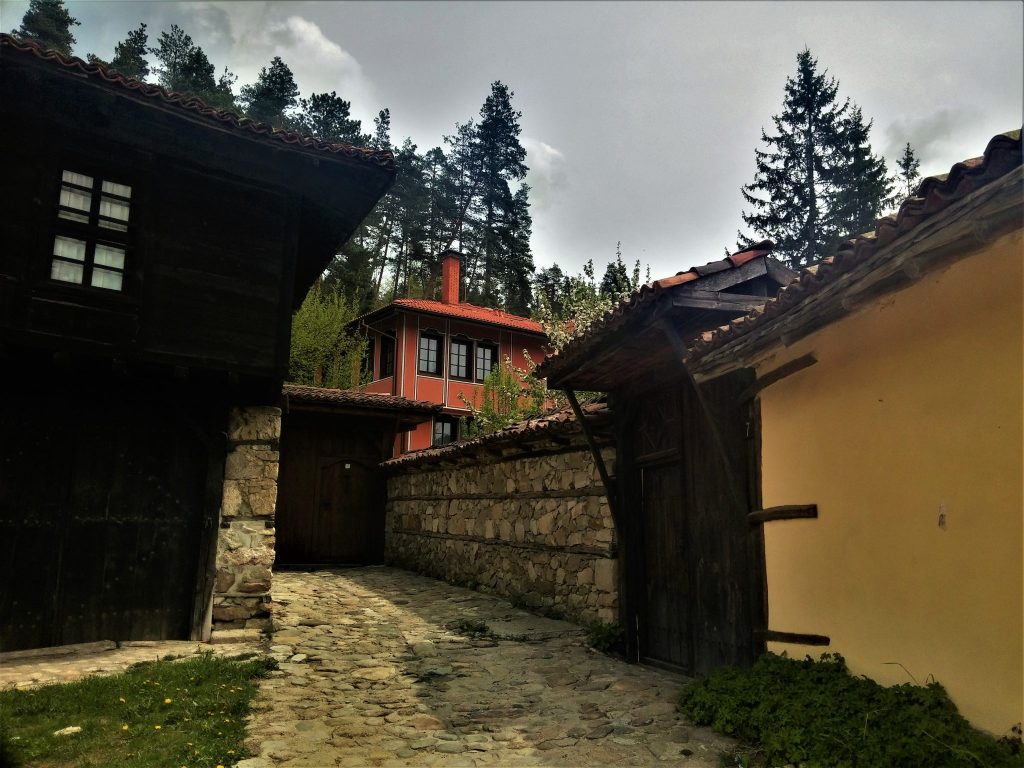 But what happens when a travel blogger arrives in such a stunning place and, amazed by the surrounding beauty, takes out her camera to take photos, but it turns out. .. she forgot her battery in the charger at home ??? Well, she uses her old smartphone and tries to do her best. With what success – I let you judge for yourselves …

2. A lesson in Bulgarian history

Koprivshtitsa is one of the rare Bulgarian cities to have preserved its authentic architecture from the period before the Liberation of the Ottoman occupation. The reason – unlike most cities and towns in our country, the rebel Koprivshtitsa was not burnt down during the Bulgarians’ insurrection against the Ottoman Empire in 1876 – the mass revolt which indirectly led to the reestablishment of the independence of Bulgaria two years later – in 1878.

When the Turks invaded the city and threatened to burn it down and destroy its population, the wealthy citizens of Koprivshtitsa collected money and buy the lives of their fellow citizens. Today, we are proud of this typical Bulgarian architectural gem immersed in history. 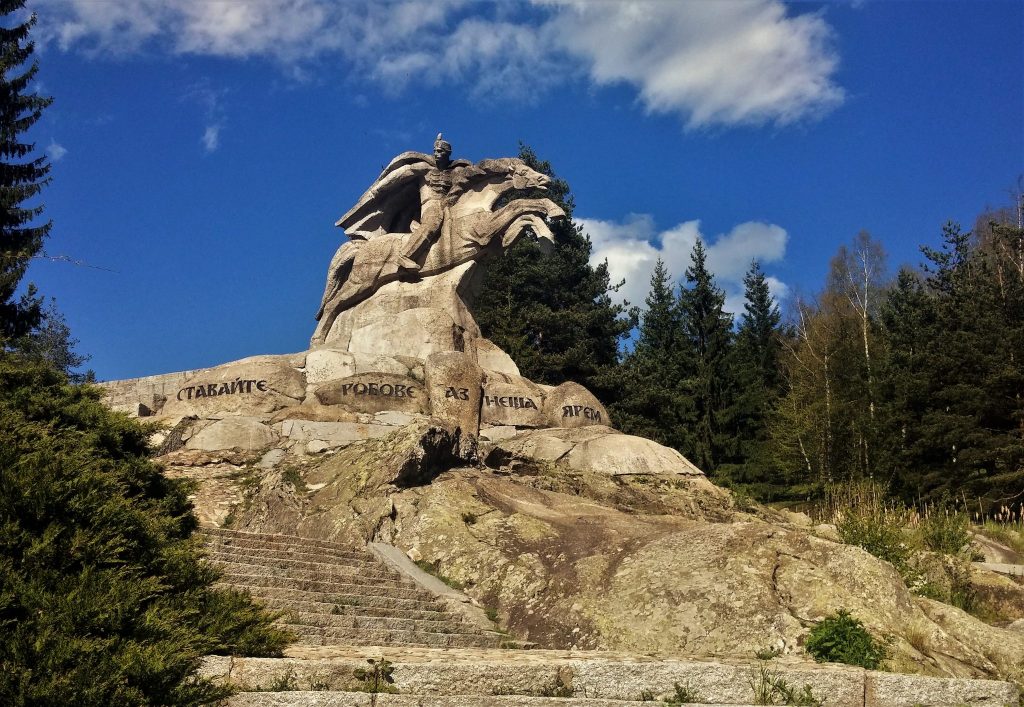 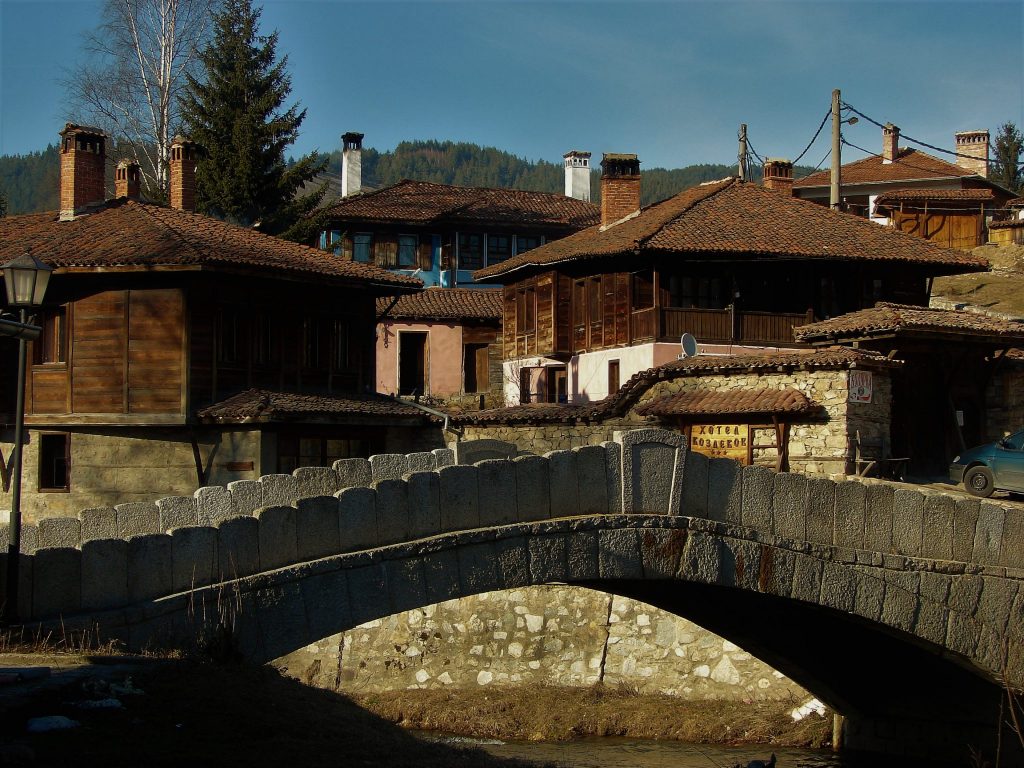 Before visiting the museums, most visitors stop at the tourist information center. From there you can buy a ticket to the main museums in the city. The fee is 10 BGN (5 euro) for adults and 3 BGN (1.50 euro) for students and retirees.

3. The museums of Koprivshtitsa

A visit to these museums reveals little known facts about the city’s past and its outstanding inhabitants. If you visit the native house of Todor Kableshkov you will learn that the famous Bulgarian revolutionary  was extremely educated. French-speaking and graduated from the French Lycée of Constantinople, he was the first Bulgarian to start translating the novel “The Count of Monte Cristo”, without however completing it. Unfortunately aged only 25, Todor ends his life immediately after his capture by the Turks. 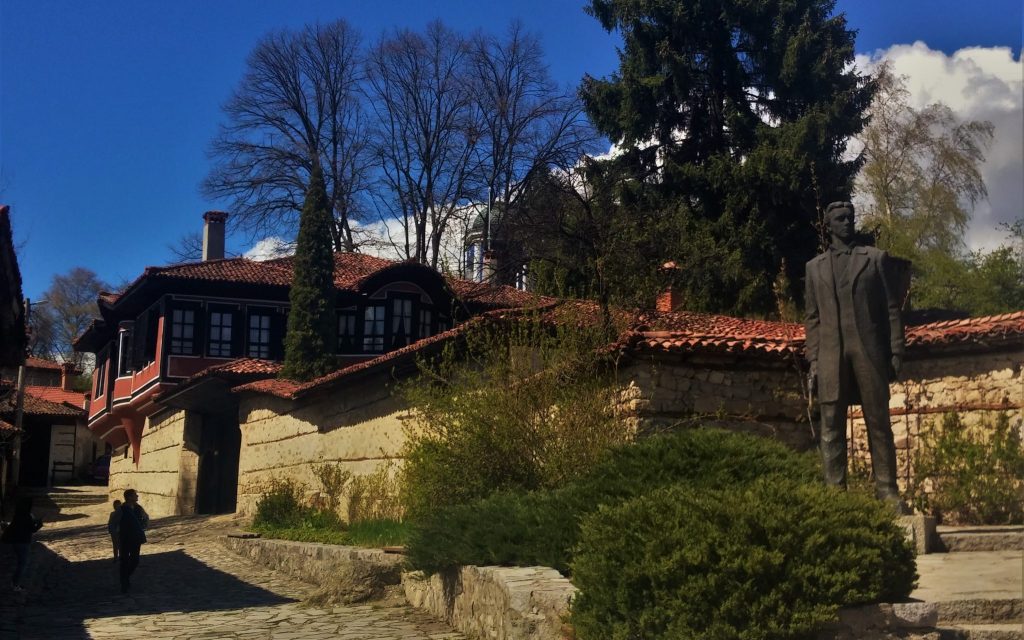 In the home of the Bulgarian poet Dimcho Debelyanov visitors can see his personal effects – manuscripts, photographs, as well as the portraits of the women of his life.  All of them were very beautiful with an air of fatal women. Among the photos – that of his beloved Elena Petrunova. Unfortunately, one morning in June, the 18-year-old girl was shot dead by her own father. The reason ? Her parent suspected her of being in love with the poet. Close to Debelyanov’s house is the Maison Palavéév.

Nowadays, an art gallery is installed here. But it was once the home of one of the city ‘s wealthiest residents. Its owner was

This local entrepreneur was considered one of the richest Bulgarians of all time. He developed a large-scale business in Egypt. He grew oranges near the Nile and exported them to the United Kingdom. And when he returned to his hometown, he became involved in charity. This is how he built the school and the city’s water supply system. He erected a monument dedicated to the insurrection against the Turks. Palaveev also financed the repair of the church, etc. At his death he left his considerable fortune to his fellow citizens.

The two churches of Koprivshtitsa

The oldest church dates from 1817. It was built at the place of an ancient temple, burnt down by the Turks. Among its icons are those of the famous Bulgarian artist from the Revival period  – Zacharias Zograf. And in the courtyard are the tombstones of Todor Kableshkov, Dimcho Debelyanov, as well as the benefactor of Koprivshtitsa – Hadji Nencho Palaveev. But the most interesting is the Saint Nicholas temple, known as “The New Church” although it is rather old – dating from 1842. 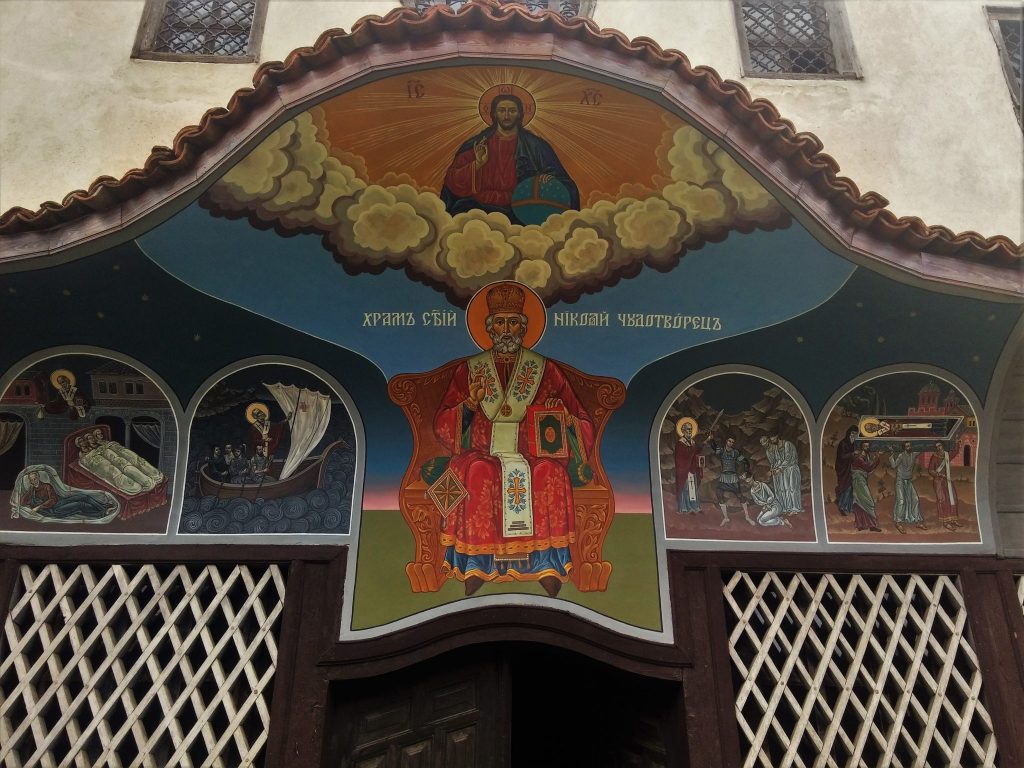 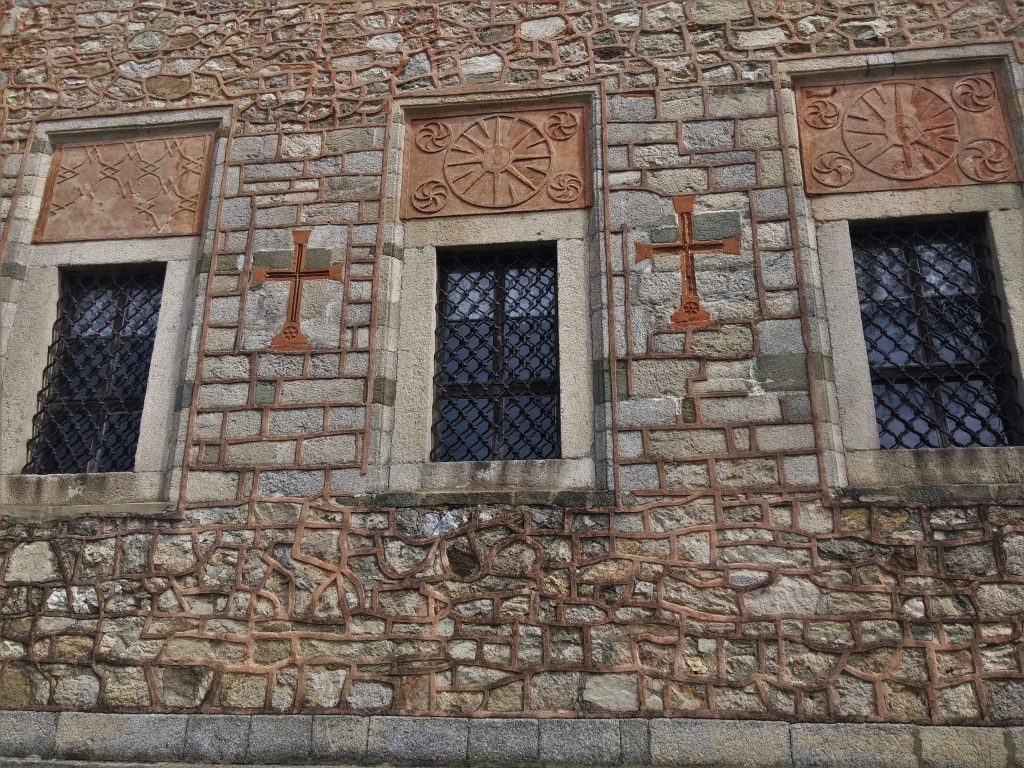 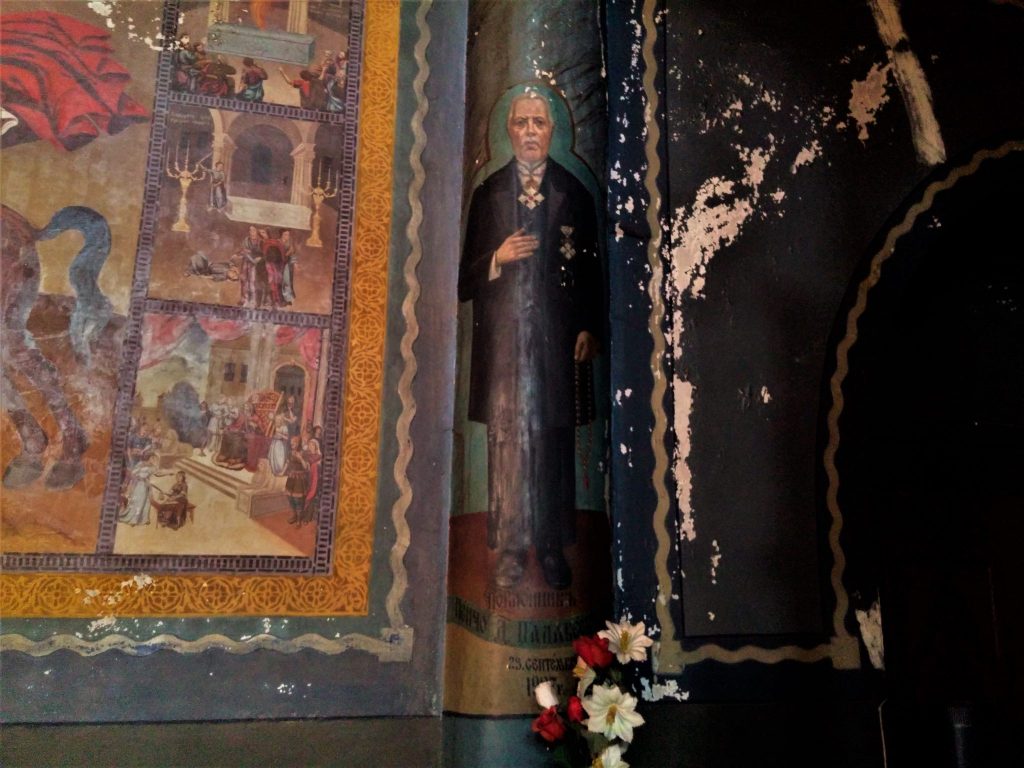 This orthodox church is distinguished by its massive construction and the strange symbols represented on its facades. It was built in the so-called Levantine style by combining Turkish motifs with those of the Italian Renaissance, as well as the Viennese baroque. Furthermore, unlike other Bulgarian churches of this period, Saint Nicholas was not dug in the ground under the command of the Turkish invaders. Of an unusual size, the temple could well house a cathedral and accommodate more than 1,000 people. In addition, its facades are of freestone, covered with strange decorations. Hadji Nencho Palaveev is one of the donors to the temple. He is pictured on the left side of the entrance. In the past there was also a school in the church yard, but today it is in ruins.

5. What are plasti and kene? 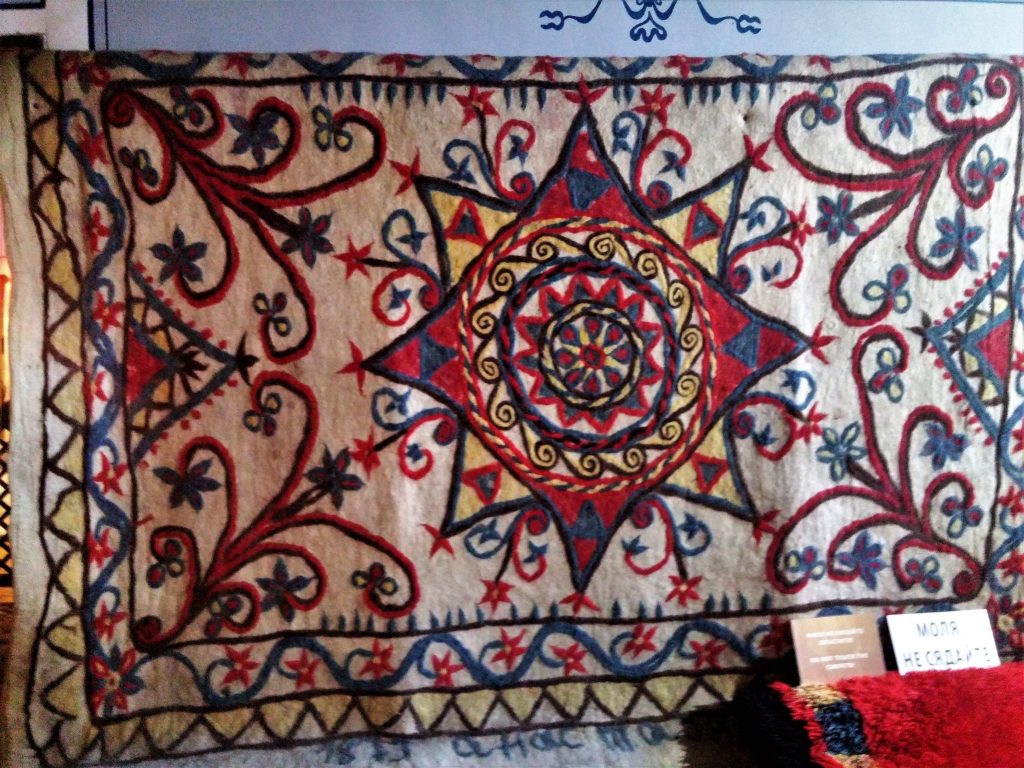 The Liutov house once belonged to a wealthy merchant who traveled a lot around the world. So when he came back to his hometown he ordered the painters, who decorated his house, to draw the places he visited on the sumptuous ceilings of the rooms.

Nowadays the ground floor of the Liutov house is transformed into a museum.

You can see on display there  exquisite crochet lace. These works of art are called kené. Koprivshtitsa’s lace is elegant and very solid. For the purpose women used  silk thread on horsehair. The locals called this sort of lace  “kené”. The town is also known for its carpets. The Liutov Museum presents a collection of authentic 200 years old hand woven carpets .

One of the most current local crafts was the production of wool, or the so-called  “plasti”. In the city center, near the historic “The First Rifle” bridge, tourists attend demonstrations. In the past, wool was treated with hot water and soap. You spread a thick layer of wool soaked in soapy water and then roll it until it becomes thick and tightened. And then you can produced all kinds of clothes and rugs with it! This is plasti!

Take a carriage ride around Koprivshtitsa 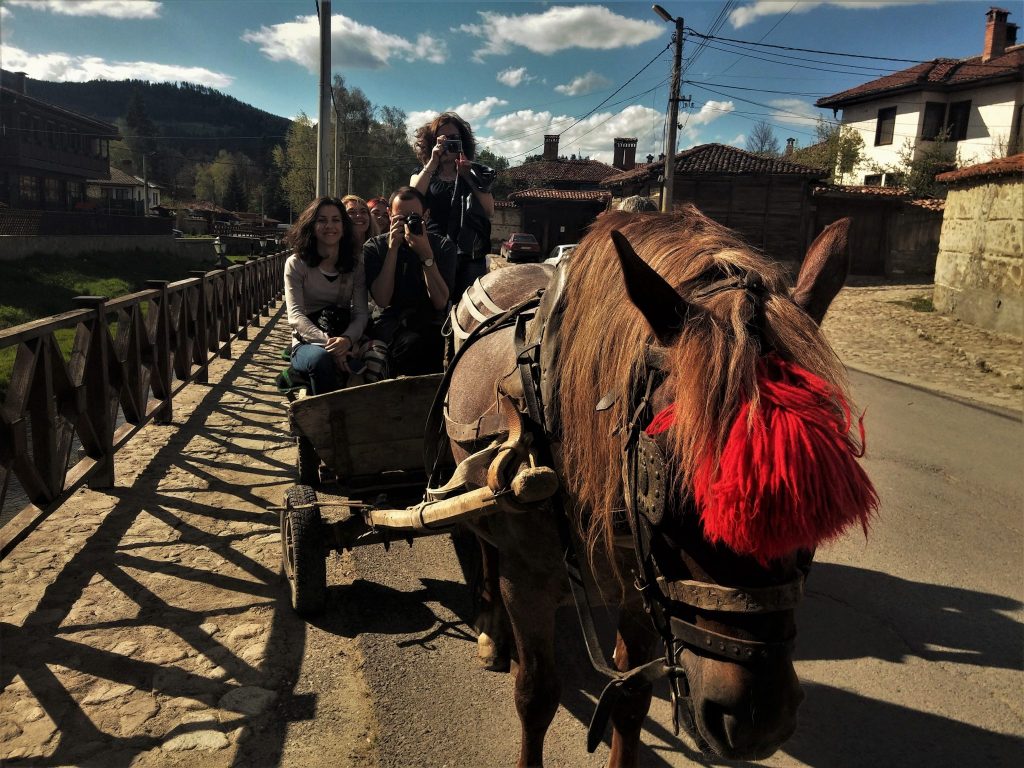 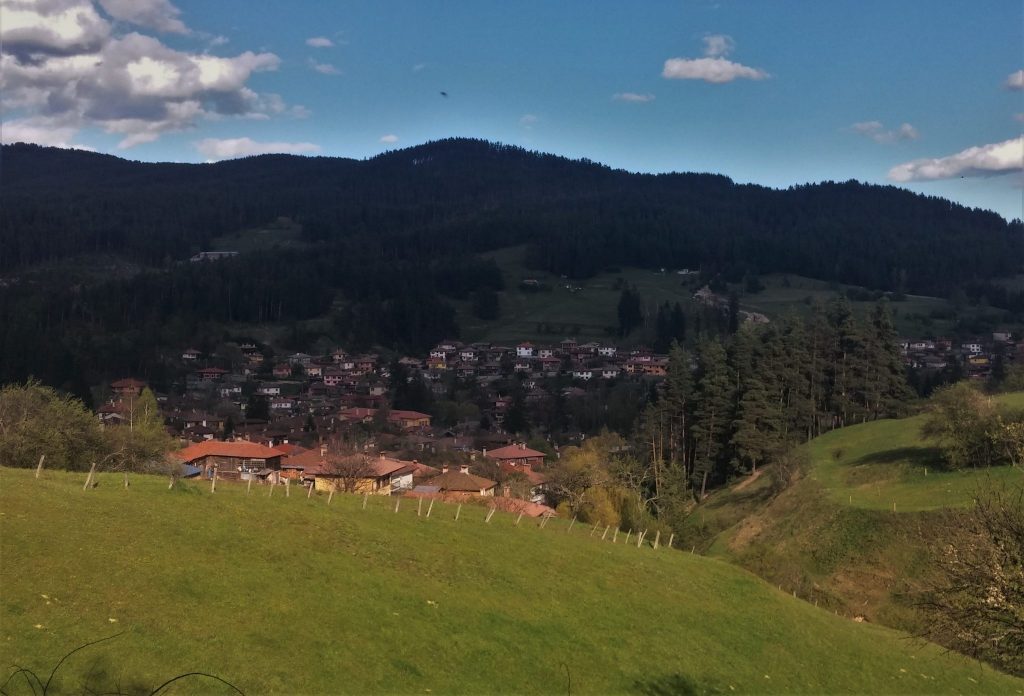 Why not rent a horse cart or even a donkey cart and tour the city with it?  Or go to the picturesque places near Koprivshtitsa. It’s a great idea! You can visit the Voïvodenets region in this way? This is where the National Festival of Popular Arts is held every five years. The surroundings of Koprivshtitsa offer magnificent panoramas. There are charming trails that lead to the heart of the mountain.

Enjoy the cozy hotels and guesthouses, as well as delicious local cuisine

Almost a third of the houses in Koprivshtitsa have been transformed into family hotels. Everywhere in town guest rooms are equipped with free Wi-Fi. Most of the hotels have a garden with an outdoor seating area and free private parking, as well as a welcoming restaurant. 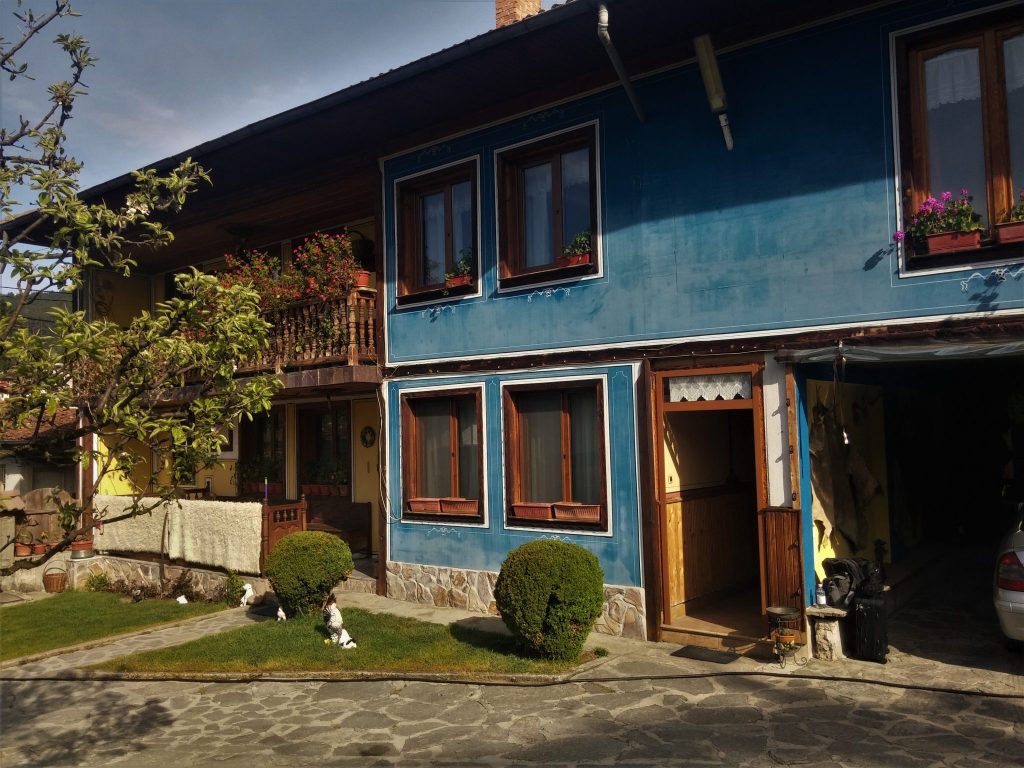 We stayed at the Paradise Hotel. And we had a delicious and hearty meal at the April 20 restaurant in the city center.

Residents of Koprivshtitsa complain that the number of tourists in town has recently decreased. The reason would be competition from other tourist destinations. But that can only please those of us who prefer to relax far away from the crowds in search of authentic experiences. And Koprivshtitsa has a lot to offer in this area.

Koprivchtitsa is a place that Bulgarians love to visit. Its beautiful houses, cobbled streets, fountains and local people give you the feeling of traveling back in time. It is no coincidence that Koprivshtitsa was ranked among the most beautiful small towns in Europe by the Japanese Association of Travel Agencies. 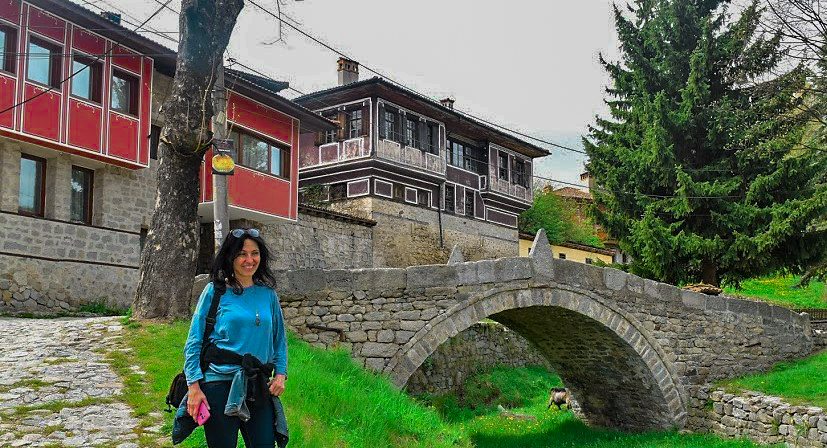 Indeed, it is an exquisite jewel, hidden within the mountain. I intend to return there one of these days. But this time – with a fully charged camera and … a spare battery. Because discovery and sharing of experiences is an integral part of any trip. 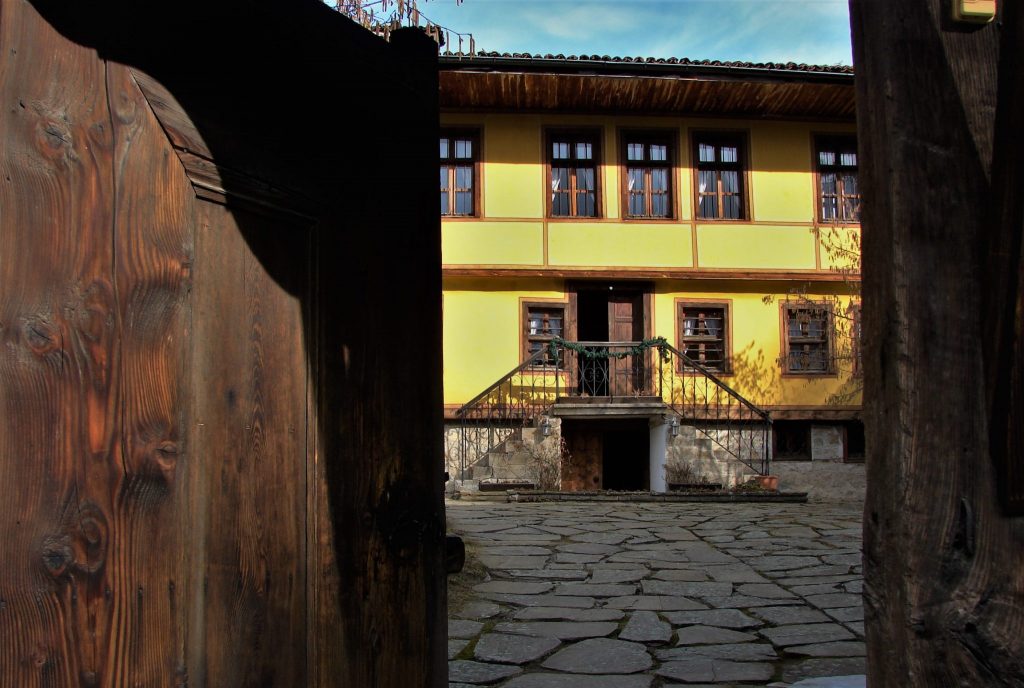 Ribnovo and its ancient wedding tradition