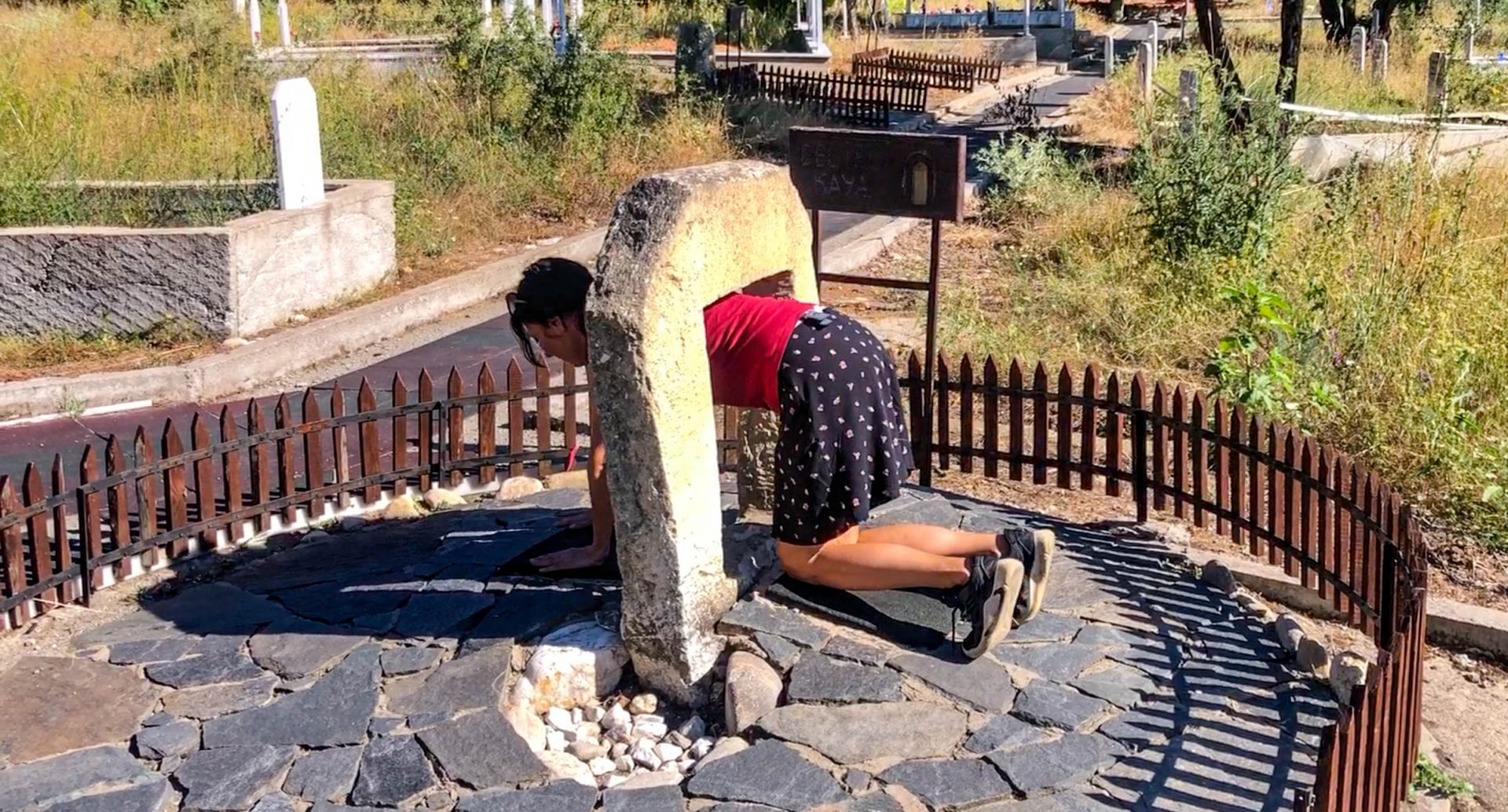 The wooden mosque in Podkova village is shrouded in mysteries.

Podkova is another amazing old village in the folds of the Eastern Rhodopes, which ignited my imagination. The village does not shine with preserved architecture or natural beauties, but it’s hidden gems attract more and more tourists.

The village of is located in the Eastern Rhodopes, just 15 kilometers away from the border with Greece. It is located away from the main road that leads to the “Makaza” border checkpoint, so casual travelers rarely stop here, but those who come, do it with a specific goal – to get immersed in the mystique of a unique building.

See the video from our journey in the Eastern Rhodopes, which has automatic translation. At 1:50 minutes one can see the Wooden Mosque and the healing stones in the village of Podkova:

The Wooden mosque of Podkova is 600 old

High in the sky above the village of Podkova the minaret of a wooden mosque rises. It is known by people as the “Mosque of the 7 Maidens”. It is the only one of its kind in Bulgaria and represents a unique example of Islamic architecture. The place is holy for the local population of Bulgarian Muslims. The mosque is permanently open to visitors. Anyone can open the wooden gate of its well-kept courtyard, walk around the flower beds and enter the temple after taking off their shoes, according to traditions. 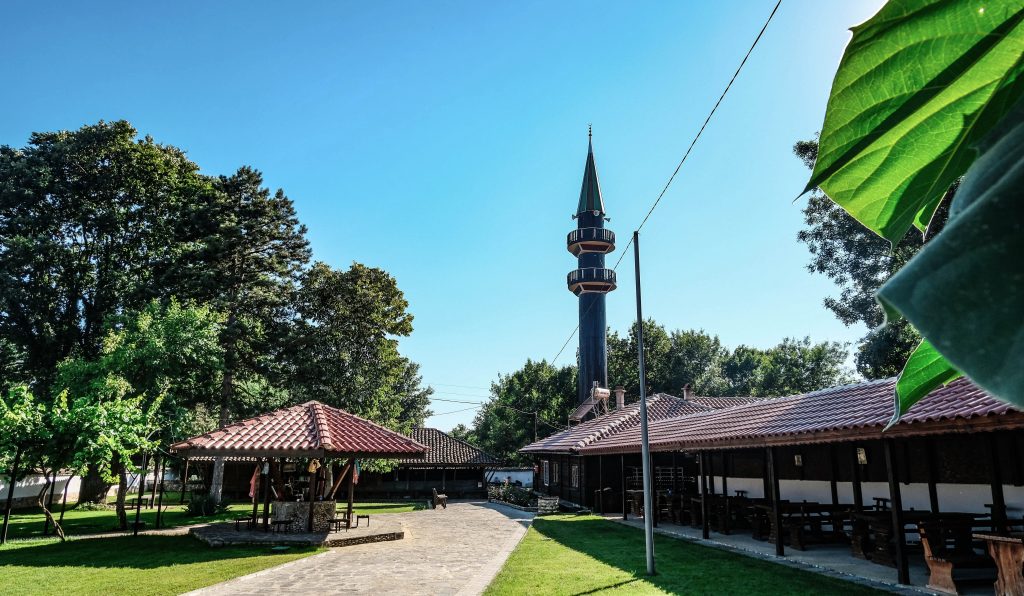 What do we know about the Wooden mosque

Apart from the date of construction of the mosque, almost nothing is known about its past. “The mosque was built in 1428 and people say it was completed on the 6th of May. Every year on this day, when we celebrate Huderlez, (a spring holiday existing in Muslim communities, coinciding with the Christian St. George’s Day), thousands of guests come to the mosque from all over Bulgaria, as well as from Greece, Turkey and even from Western Europe,” Sevindzh Sherif, the longtime mayor of the village of Podkova, says. It seems that most people here accept as a historical fact the legend of the 7 maidens who with their own hands erected the wooden temple in short time. 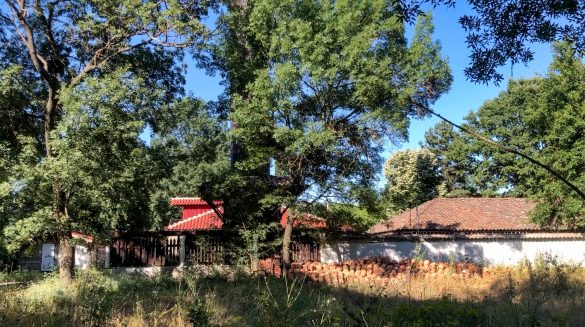 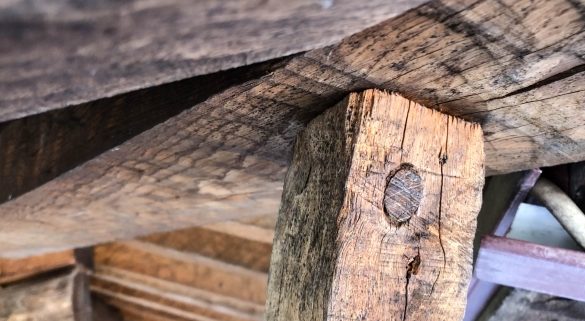 The legend of the Seven Maidens

Their fiancés went to war and never came back. Therefore, the girls sold their dowry and used the money to build the mosque. They brought the timber from the nearby forest, located near today’s railway and built the mosque for just a night without hammering a single iron nail into the structure. In the morning, before dawn, the maidens bowed down and did their prayer. No one saw them ever again, and nothing was heard of them. “This is what I know about our mosque from my grandfathers and grandmothers,” Sevindzh Sherif says.

The people in Podkova pay tribute to the feat of the Seven maidens through seven symbolic graves – cenotaphs, arranged in the temple yard. Nearby, we come across a Turkish cemetery that is not just an ordinary one, as people say that healing stones are scattered around.

The Healing stones of Podkova village

Near the mosque and it’s cemetery , there are several stones that are said to have healing powers. Old people claim that you have to believe in their healing power to get rid of your illnesses. They have been there for as long as they can remember. Some say that the stones are from the time when the mosque was built. But no one knows for sure if they were brought from somewhere or if they were here before.

Each of the four stones in the graveyard has a plaque with indication of exactly how to take advantage of their healing powers. It is believed that if we touch them and absorb their energy, we will recover after a while. One stone is said to be for the knees and joints, another for headaches, there is also a stone for waist pain.

The so-called “dupcheniya kamak” (the Drilled stone) is said to help with all diseases, including infertility. But there is one condition –one needs to pass through it three times in a counter-clockwise direction. And preferably on May 6th, when the healing properties of this mystical place are believed to be the strongest.